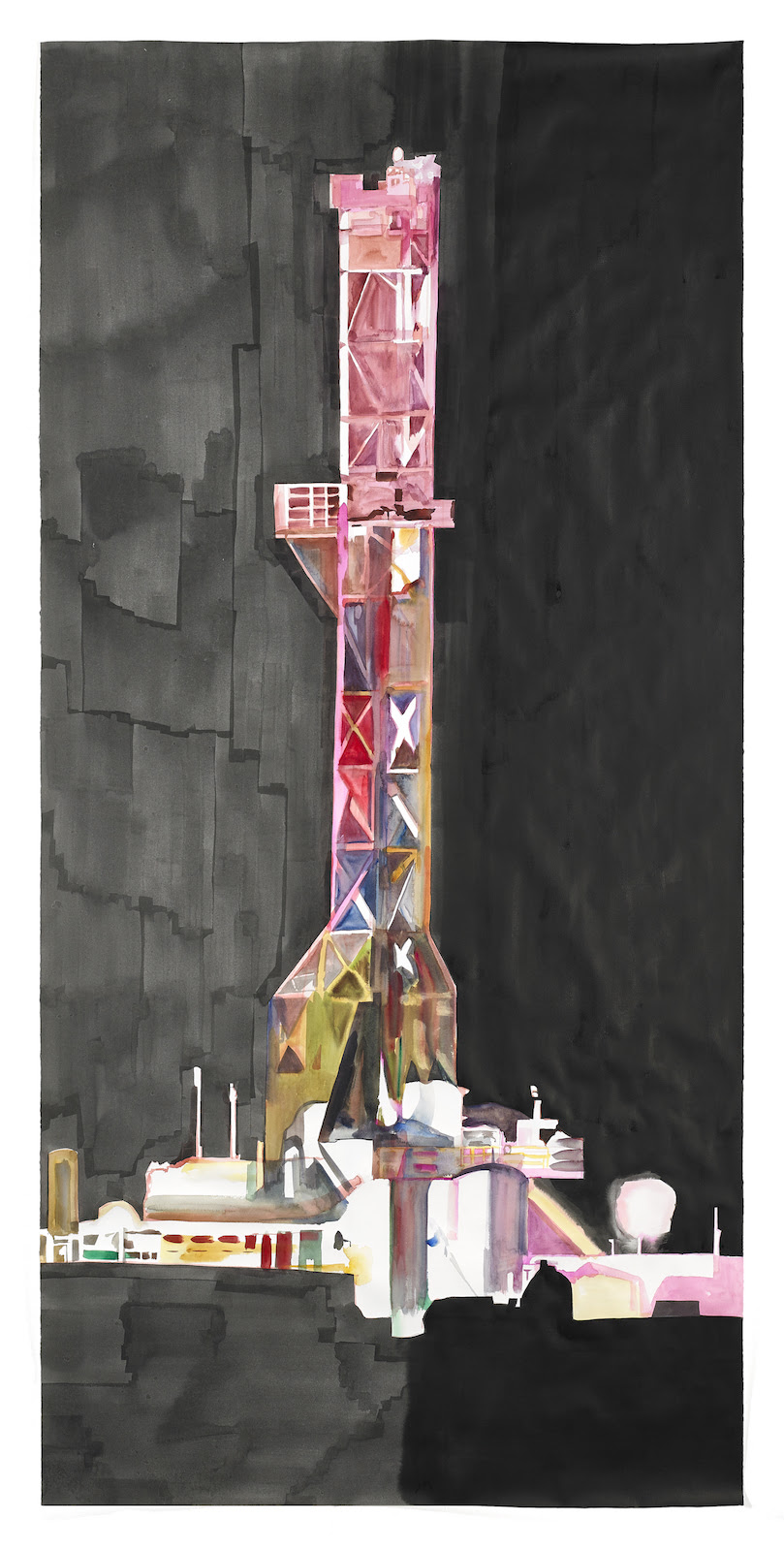 Music by i feel tractor at 7PM

“Recently, I’ve been using watercolor to paint images related to the oil industry in Texas’ Permian Basin. My family is from Texas, and it is a landscape that I love. However, my anxiety about the environmental toll of fracking and the industry’s shortsightedness have led to complicated emotions and fractured perception, which I seek to embody in my work. Car windows often serve as frames or lenses for the landscape. In my studio, I lay large sheets of watercolor paper down on the floor and paint from above. Rather than depict the horizontality of the place, I layer and stack images, attempting to show a sense of time going down deep like roots. Landscape is ‘a way of seeing’ determined by historical and cultural forces; not solely geographic, they are biographical and personal too. Another way to put it would be that there are no landscapes, only contexts.” – KB Jones

“In the early 2010’s I made a trio of videos of young women reciting texts that address language and popular culture. The subject matter of each narrative was personally relevant to me as a suburban adolescent who was deeply invested in counter culture. One of these works, Go Ask Alice, shows a pet snake eating and regurgitating an egg while the made-for-television movie of the cautionary diaristic teen novel, also called Go Ask Alice, is heard, and ultimately seen, in the background. There are inherent and constructed contradictions in this pairing to create an intense, extended moment where the visceral phenomenon of the snake’s actions and the staged reality of the television program intersect.” – Juliana Paciulli

“The show title is ‘Well’, and the meanings that come to mind first (but appear last in the dictionary (merriam-webster.com)) are ‘free or recovered from infirmity or disease: healthy’ or ‘being in satisfactory condition or circumstances’. Those first impressions are probably due to a preoccupation with ‘well-being’; the subject of my work (mugs) falls in the same line. Mugs are an embodiment of contentment within our grasp.

In my paintings I crop close around the handles, enlarging them to nearly three feet, and the rounded forms, so familiar and basic, become harder to know. Design and decoration mingle with murky reflections and ambient light - context muddies the surfaces. Maybe the way to stay well is to explore rather than avoid inevitable disruptions, to seek potential in the riddled present, to become more familiar with ambivalence and disgust. I see Juliana and K.B.’s work as a step ahead in this regard.” – Julia Goldman

KB, Juliana and Julia all live and work in New York City.

(Hope you can make it! No RSVP necessary. - SV) 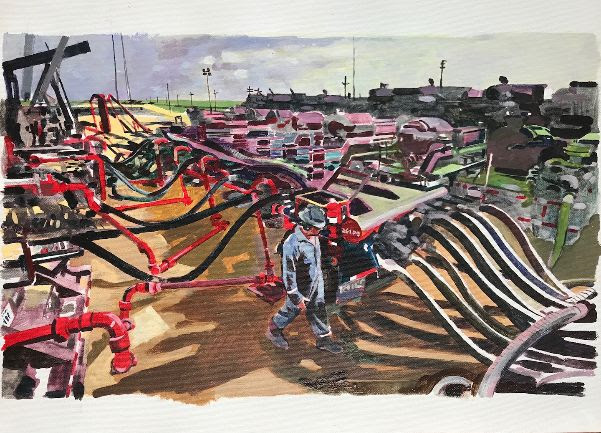 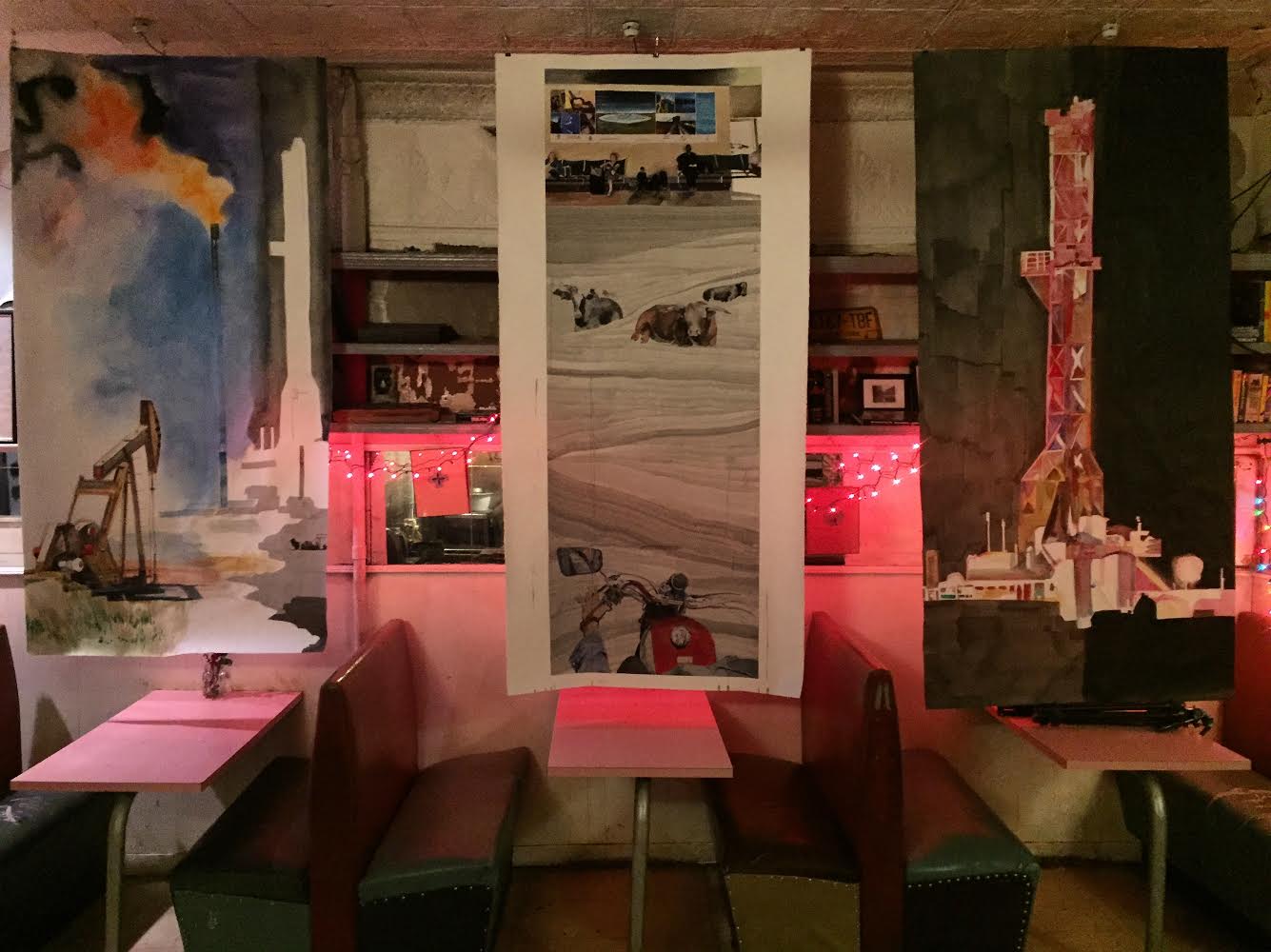