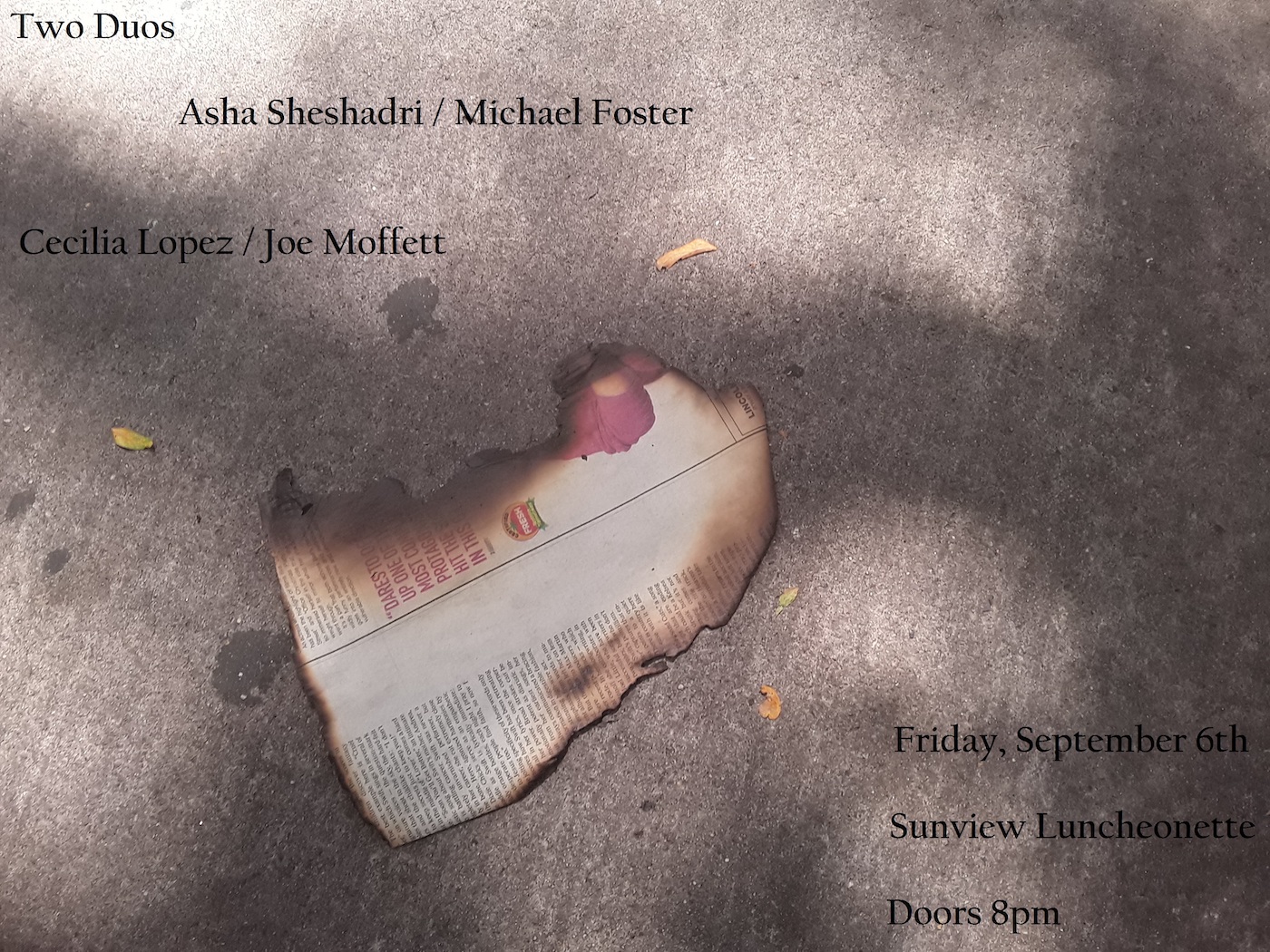 Asha Sheshadri is a New York based artist. Her multivalent work commingles memory construction, questions of citation and translation, and lost or silenced histories and diasporas. In her essayistic videos, recordings and performances, she layers her own voice with original writing, text sourced from found documents, places, and people she admires, creating environments of musical and non-musical artifacts alike. She was an affiliated fellow at the American Academy of Rome, earned an MFA from the University of Pennsylvania, and is an alum of the Whitney Independent Study Studio program. Her work has been exhibited and performed at spaces including the Artists’ Space, Vox Populi, and the MIT List Visual Arts Center. To date, her recordings have been released on Further Records, Entr’acte, and Recital Program, with a forthcoming work to be released on the Anomia imprint.

Michael Foster is a saxophonist and multi-instrumentalist working in the fields of free improvisation, noise, free jazz, experimental composition, video, performance art, and other forms of “weird music.” Foster utilizes extensive instrumental preparations, augmenting his saxophone with amplification, objects, balloons, drum heads, vibrators, tapes, and samples as a method of subverting and queering the instrument’s history and traditional roles. In addition to his work as a performer he is also active as a curator throughout New York City, co-founding “Queer Trash,” a curatorial collective focusing on providing visibility to LGBTQIA+ performers engaged in experimental performance practices. His current projects include duos with Ben Bennett, Claire Rousay, Leila Bordreuil, Lydia Lunch, and The New York Review of Cocksucking, he also often performs with Weasel Walter, Sarah Hennies, Marina Rosenfeld, William Parker, and many others.

Joe Moffett approaches his work with a keen interest in unconventional sounds and forms, collective improvisation/composition, and the intersection of action and stillness. He is a co-founder of several projects, including ambient improv trio Earth Tongues (whose third album, Atem, will be released in the fall of 2019 on Neither/Nor Records) and the avant-art song duo Twins of El Dorado, in addition to performing frequently as a solo artist. His first official solo album, More of It and Closer, was released on Tubapede Records in the fall of 2018. He has also appeared as a co-performer with a number of artists and projects including Yoshi Wada, Joe Morris, and Tredici Bacci. His material appears on Neither/Nor, Underwolf, Eh?, NotTwo, Tubapede and Prom Night Records.