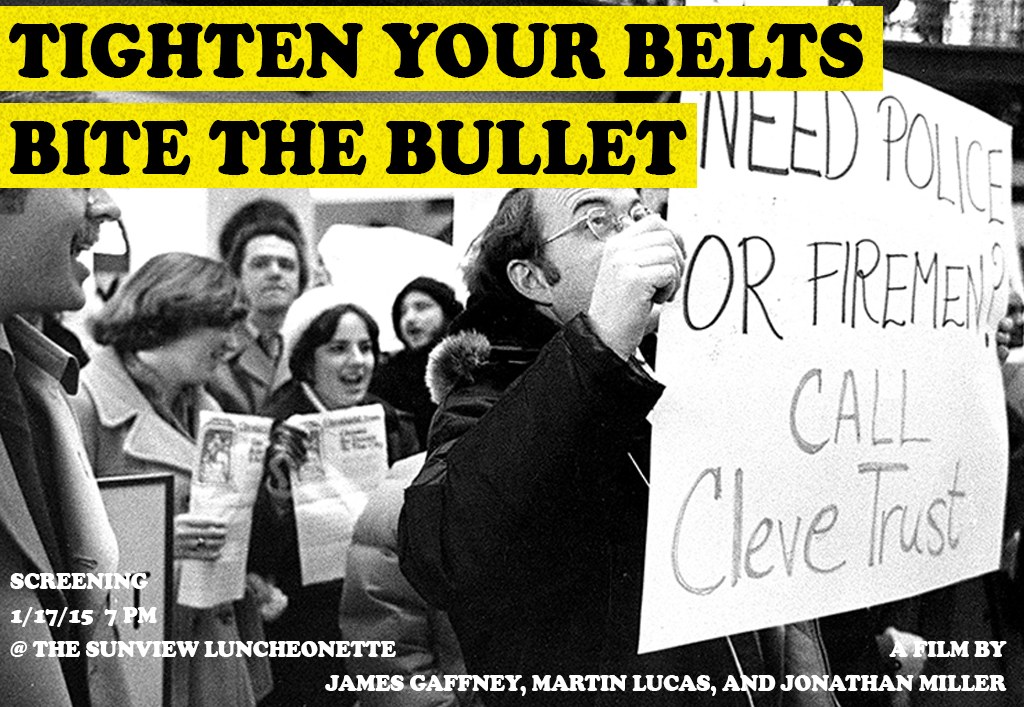 Sunview Luncheonette is thrilled to host a screening of:

A Film by James Gaffney, Martin Lucas, and Jonathan Miller

Co-presented by Neighbors Allied for Good Growth (NAG) and the Sunview.

Capacity is limited, so please come early (and RSVP!)

Focusing on the 1970s fiscal crises in NYC and Cleveland, Ohio, TIGHTEN YOUR BELTS, BITE THE BULLET looks at the roots of such crises in American cities, as well as political responses, the public imaginary, and grassroots organizing against austerity.

In New York, the film traces the political and economic history leading to the default threat of the 1970s, the creation of the Emergency Financial Control Board, and the result of these developments – namely, cuts in city services with a devastating impact on city workers and residents. The film contrasts New York's political response to the crisis with that of Cleveland, where a young Mayor Dennis Kucinich makes an appearance to lead "The Battle of Cleveland" waged over nothing less than control of the city itself.

Blending animation, news footage, and exclusive interviews, TIGHTEN YOUR BELTS, BITE THE BULLET is an enlightening history of a watershed moment in recent urban history, – the fiscal crisis still looms large over the public imagination of what "might happen" and is carted out whenever seemingly unpopular cutbacks are proposed or austerity measures imposed. The film provides a backdrop to understanding New York City today.

As film critic Jonathan Rosenbaum wrote back in 1981 “I would be horrified indeed if New Yorkers were deprived of another chance to look at Tighten Your Belts, Bite the Bullet, which should be made available on every street corner…the most intelligent, powerful, and informative rabble-rousing leftist film that I have seen in years.”

Join us at the historic Sunview Luncheonette for a look back, followed by an informal discussion of where-we're-at.

Martin Lucas is an artist, educator and media activist. As a founding member of the Paper Tiger Television Collective, Martin was one of the producers of The Gulf Crisis Television Project in 1991. His work in television news included the first TV exposé of the AIDS drug-pricing scandal for ZDF German Television. His media works looking at urban crisis and the militarization of culture including Earlier Incident, featured at the 2009 Niet Normaal Exhibition in Amsterdam and Treatment Plan featured at the 2011 Videoart.net Festival in New York. His work has been seen at locales including the Buena Vista Arts Center, San Francisco, the Eyebeam Art and Technology Center, New York, The Knitting Factory, The New York Film Festival and the Ars Electronica, Linz. Martin teaches video and new media production and theory in the Integrated Media Arts MFA Program of the Film and Media Studies Department at Hunter College, City University of New York. Tighten Your Belts, Bite the Bullet (1980), produced with James Gaffney and Jonathan Miller, was Lucas's first film.