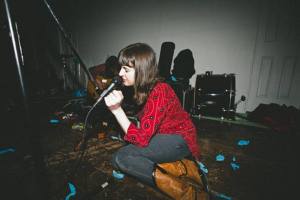 Image: Rosemary Krust photo was taken by Chester Hawkins in DC in 2010

The Baltimore duo Rosemary Krust has been a musical love of mine for nearly ten years. I’m very excited to present them to Brooklyn at the cosy Sunview Luncheonette, and to cook a big batch of soup for the occasion. Please come to our party on Fri Feb 22, and also enjoy tunes by fellow bedroom lofi Baltimorean Yes, Selma, as well as my own duo set with Bob Bannister.

I really hope you can make it!
-Rose Thomas Bannister

“Baltimore natives Katherine Plummer and William Hardy formed Rosemary Krust in 2007. They practice a kind of ‘cucina povera’ aesthetic of regional experimentalism. Minimalist rock and folk forms the basis for much of their sound, but are often completely eschewed in performative emotionally cathartic maelstroms of improvisation. Releases and performances of the duo have been scarce, but cassettes and singles can be found on the Spleencoffin, MT6, Goaty, Dull Knife and Washy Labels.” -Spleencoffin

Yes, Selma is the bedroom recording project of Chad Beattie. Check the internet for the video for “I Don’t Want to See You (Alone Anymore).” “A world lit by a single bulb in an empty room.” -Simon Lewis