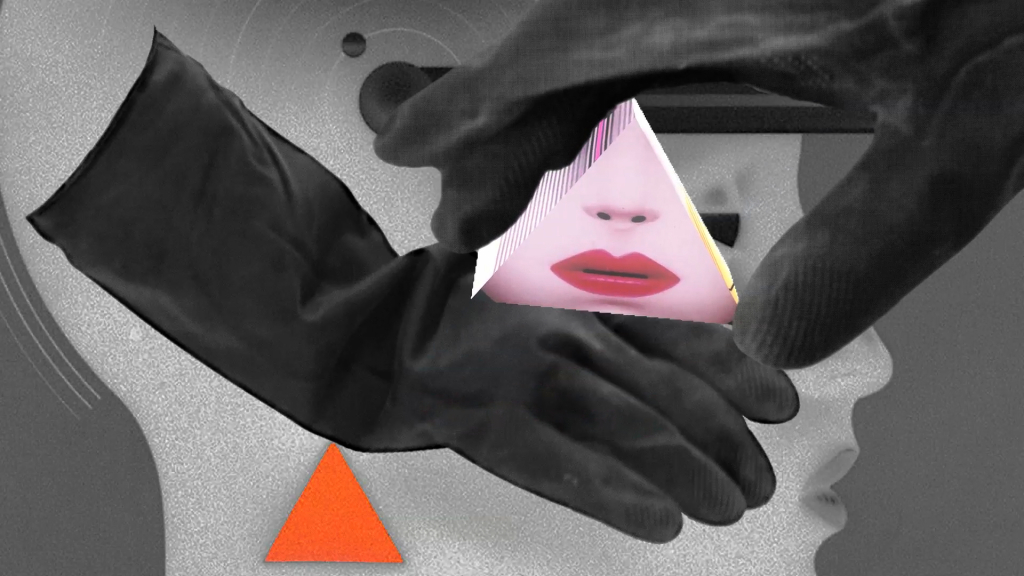 Ready-to-hand as a term is a description of the nearness or physicality of a thing in the world, specifically as related to people/persons. This term and the videos in the program are tiny slivers attempting to permeate the impermeable idea that is truth. Many of the videos question what an object has to be in order to earn its name ("steering wheel", "lever", "tear drop", "stomach"), while others study the nature of object permanence, absurdity's role in our understanding of reality, and how objects can threaten or fool.

Ready-to-hand: a screening at the Sunview Luncheonette, December 13th, 2014 at 7 pm.

In this absurdist take on the hero's journey, the filmmaker plays the role of a woman artist in pursuit of inspiration. At once emboldened and tormented by her own creative ambition, her artistic and cinematic predecessors, and even by her DP, she careens through a cavalcade of cultural influences before erupting in a deceptively charming slapstick routine.

Scenes like one of the artist giving an earnest interview with confetti stars covering her Vaseline-smothered face, or directing an invisible Bruce Willis to deliver his famous line from “Die Hard” with more nuance, are framed by Brechtian interludes that reveal the cinematographer helping set up the slapstick shots. As the cinematographer invariably assumes an ambiguous position of authority in the narrative, the artist’s antagonistic relationship with the spectacle of vulnerability and amusement begins to unfold.

Bio:
Irina Arnaut is an artist and filmmaker based in New York City. Her films feature women engaged in fantastical situations and bizarre relationships, with a bent toward physical comedy. Her experimental narrative films are strongly influenced by performance and video art as well as contemporary dance and theater. She received her MFA from Bard College in 2012. Arnaut has exhibited widely in New York and throughout the United States, and her work has been highlighted in Art F City, The White Review, The Brooklyn Rail, and Contemporary Art Daily.

Angela Conant and Yasmeen Sudairy
Driving Lesson
2014
r/t 11 min
Sudairy gives Conant a driving lesson in Arabic. The “instructor” is from Saudi Arabia where women are not allowed to drive. The “student” is from the US where driving is very accessible, yet she got a license at the late age of 18 and hasn’t driven much since. Her license has lapsed and she now must go through the instructional process from the beginning. Echoing the absurdities surrounding their respective situations, the video features a fake car made of paper with an oil-on-canvas steering wheel, spliced with footage of a lesson shot in a real car.

Bios:
Angela Conant is an artist who makes paintings, drawings, videos and sculptures about objects and light. Her work has been exhibited at Electronic Arts Intermix (New York City), The Elizabeth Foundation Project Space (New York City), Old School in conjunction with The Armory Show and The New Museum's Festival of Ideas (New York City); Glasshouse Projects (Brooklyn), Interstate Projects (Brooklyn); the Delaware Center for Contemporary Art (Wilmington, DE) and ICA Baltimore (upcoming solo). She has spoken at Boston University's School of Fine Art and at New York Foundation for the Arts. She was awarded a Critical Writing residency at Recess (New York City) in 2013 and an Artist Residency at the Millay Colony in 2014. Conant earned a BFA in Painting from Boston University in 2004. In 2007, she co-founded The Gowanus Studio Space, a non-profit arts organization in Brooklyn where she served as Artistic Director until February, 2014. She received an MFA from School of Visual Arts in 2013.
www.angelaconant.org

Dylan Gauthier
unspecific positions on the feelingbeing of objecthood
2014
r/t 3:33

"We take pleasure and enjoy ourselves as THEY take pleasure; we read, see, and judge about literature and art as THEY see and judge; likewise we shrink back from the "great mass" as THEY shrink back; we find "shocking" what THEY find shocking." ~ M.H.

Dylan Gauthier is an artist, educator and curator in the public realm and a (co-)(re-)founder of The Sunview Luncheonette. He has shown work and given talks at MASS MoCA, PS1, The Walker Art Center, Stacion Kosovo, Issue Project Room, EFA Project Space, Parsons/the New School, Columbus College of Art and Design, Gigantic ArtSpace, the Neuberger Museum at SUNY Purchase, the Boston Center for the Arts, and the Wassaic Project, New York.

Beka Goedde
Specious Present I
2011
r/t 5:53 min (loop) digital video
The action of throwing a ball and catching it is slowed into a duration of nearly six minutes. This video was initially coupled with a sculpture (Specious Present II) regarding the same action, extending over 80 feet at Bard College during Goedde's MFA thesis exhibition in 2011.

Bio:
Beka Goedde is a sculptor and printmaker whose work explores duration, the perception of change, and movement in physical space. Goedde has exhibited work at IPCNY, 80WSE, Recess, Cheim and Read (NYC); The Gowanus Studio Space, GRIDSPACE, Bushwick Cooperative, and Saffron (Brooklyn); Habersham Mills (Atlanta, GA); Incident Report (Hudson, NY); and Triple Canopy (online). She is a graduate of the Bard MFA program in Sculpture, and holds a BA from Columbia University (Barnard College) in Behavioral Neuroscience and Philosophy. Goedde was recently an artist-in-residence at JTHAR, Millay Colony, and PS122; this winter she will be in residence at Yaddo. Goedde lives and works in Brooklyn, NY.
www.bekagoedde.com

Jen Liu
THE MACHINIST’S LAMENT, 2014
HD VIDEO
r/t 17 min, 47 seconds
When economists and politicians talk about bringing industrial production back to America, dream logic suffuses the discussion: everything will fit again - society, economy, family - if only the factories came back.  The Machinist’s Lament speculates on this wish, while exploring one of its downsides: the alienation of the worker.  Alienation marks the wearer of safety masks separated from the world around them, while it also marks the woman who imagines the world as it could be: a wealthy industrial power ruled by women.   This is a sequel to my 2013 Safety First (Bad, Don’t Touch, Mercy!).  Footage was shot in Ohio, and voice over texts include industrial manuals, Monique Wittig’s Les Guerilleres, and Adorno’s Minima Moralia.

Jen Liu is a visual artist working in performance, video, painting, and installation. She studied at Oberlin College, California Institute of the Arts and at De Ateliers in Amsterdam. She has presented work at the Shanghai Biennial; Liverpool Biennial; Aspen Museum of Art; Henry Art Gallery, Seattle; MUSAC, Leon; Royal Academy and ICA in London; Binz39 and Kunsthaus Zurich; The Sculpture Center, On Stellar Rays, and Issue Project Room, New York; and Kunsthalle Wien, Vienna. In 2013 Liu's installation Melon Mysticism for Everyone, was affixed to the Manhattan Bridge in New York, and she is currently developing a digital project and performance piece commissioned by Triple Canopy. Liu lives and works in New York.

Sierra Pettengill
CLONAZEPAM (preview)
2014
r/t 5 min
CLONAZEPAM is a digitally-mediated journey across the ocean captured through a haze of panic and pharmaceuticals.

Scandinavian Airlines has affixed cameras to the bellies of their airplanes. Those lo-res images stream in 4×3 aspect ratio on the tiny 6.5” seatback screens throughout their flights. In August, I took my required dose of anti-anxiety meds, and for six white-knuckle hours recorded the seatback skies as they passed below.

CLONAZEPAM consists of disintegrating ‘beauty shots;’ the plane-mounted camera forming one degraded layer, the screen another, my camera a third, and the drugs a fourth. Through the tonal shifts in the white noise of the audio field of the plane’s cabin and the slight variegations in the image quality of the clouds, the video hovers between the recognizable and an abstracted trance.

Bio:
Sierra Pettengill is a Brooklyn-based filmmaker. TOWN HALL, her directorial debut, broadcast nationally on PBS in 2014. She is the producer of the Oscar-nominated documentary CUTIE AND THE BOXER, and the archival producer of Matt Wolf’s TEENAGE (Tribeca ‘13) and Ross Kauffman & Katy Chevigny’s E-TEAM (Sundance ’14). For PBS, she was the associate producer of the Emmy-nominated WALT WHITMAN, as well as the Peabody Award-winning TRIANGLE FIRE. She was also the associate producer of HBO’s WARTORN: 1861 – 2010 and Nick Bentgen’s NORTHERN LIGHT. She is currently co-programming the Spring 2015 Flaherty NYC screening series at Anthology Film Archives and producing THE REAGAN YEARS, directed by Pacho Velez.

Max Sherwood
NERVOUS PERSON
2013
r/t 6 min
NERVOUS PERSON is a loud silent film and an upsetting slapstick comedy. A man is lost at a public event that is as wholesome as it is strange. Meanwhile, the little man inside his body fights to remain in control.

Max Sherwood draws influence from great silent cinema, pop films, art films and his work as a Property Master on feature films in New York.  He was daydreaming about The Cabinet of Dr. Caligari and The Wild Bunch and Nashville and Stalker while Prop Mastering The Place Beyond the Pines, Blue Valentine, Blood Ties, Frozen River, A Walk Among the Tombstones and Run All Night. His work has been shown at New Filmmakers LA (2013), the Brooklyn Film Festival (2013, Audience Award), the New Orleans Film Festival (2013) and the Art of Brooklyn Film Festival (2013). 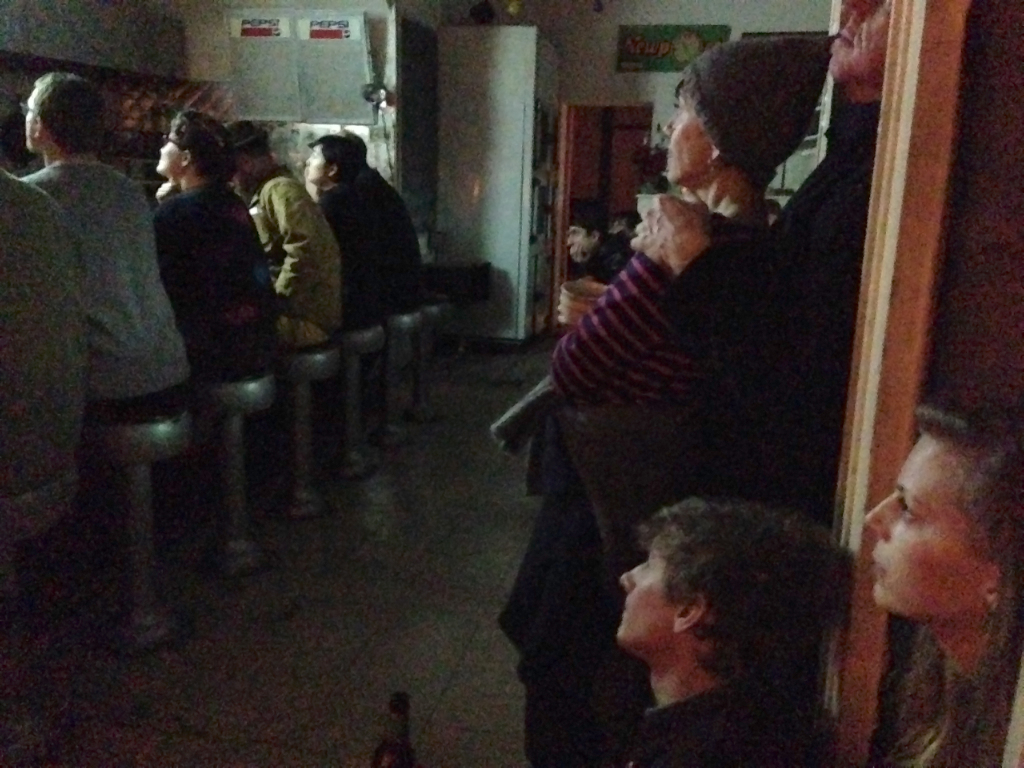 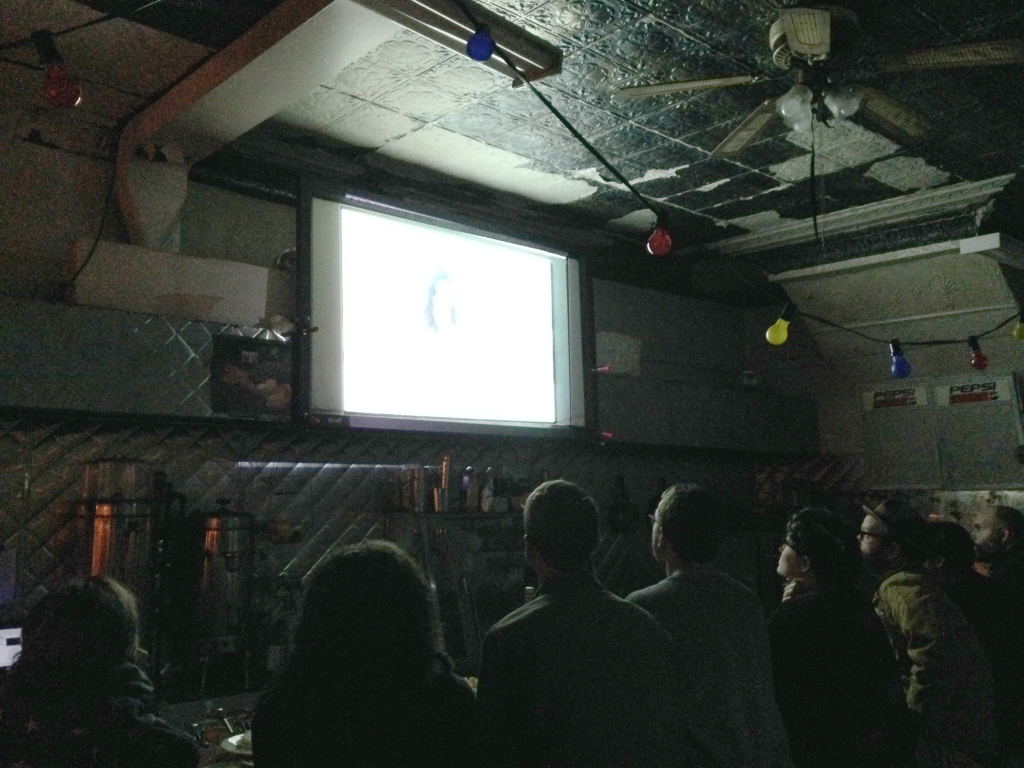 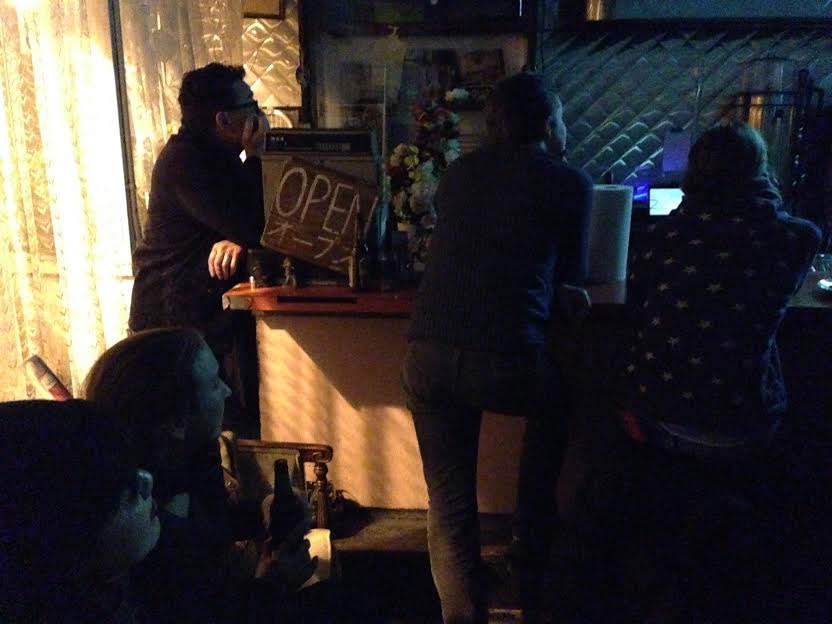