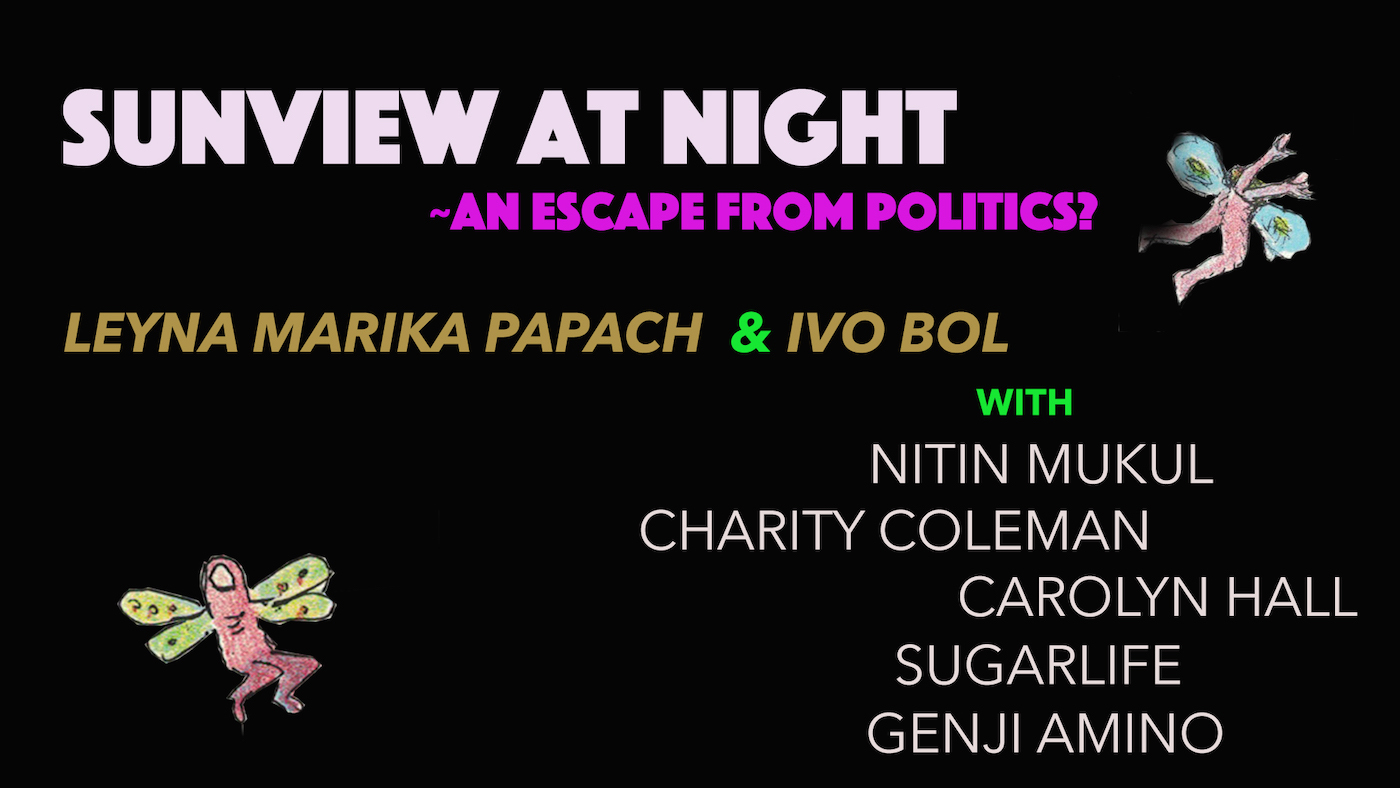 “Sometimes we gotta step out of the chronological brain, and just sniff each other out.”

SUNVIEW AT NIGHT // An escape from politics?
~ party for the right brain, ears, nose and mouth ~

Musicians Ivo Bol and Leyna Marika Papach are excited to play with each other, and to improvise with…

Nitin Mukul : visual deep dive
Charity Coleman : poetry and talking to you
Carolyn Hall: movement/dance, a subtle science
Sugarlife: …..you’ll see.
Genji Amino: words that are sounds that are words that are…

Leyna plans to cook too~

//More details and Bios below//

IVO BOL (live sampling - synthesis)
Ivo Bol is a composer / performer from Amsterdam. “Composing involves listening to the world around you. To the hum of the fridge or the noise of the record just before the song starts. When performing I use my body to manipulate these sounds with light sensors, touch, gesture or brainwaves.” ivobol.com
//
LEYNA MARIKA PAPACH is a musician and interdisciplinary artist from Japan and the United States. Her compositions house the languages of dance, theater, sound, and image. Leyna’s performative work has been presented internationally in Europe, Japan, and the US. As a composer and violinist, she has worked with a wide range of artists, both as a collaborator and/or interpreter (Taylor Mac, Eric Ting, J.G.Thirwell, Geraldind Fibbers/Nels Cline, Dada Tapan Kanti Baidya) and many others). Leyna holds an MFA in interdisciplinary studies from Bard College, MA in Theater and Dance Studies from DasArts (now DAS Theater), Amsterdam. She studied dance with Germaine Acogny at L’ecole des Sables, Senegal, and violin at the Prague Academy of Music. www.leynamarikapapach.com
//
CHARITY COLEMAN is a Brooklyn-based writer and performer.
//
CAROLYN HALL is a Brooklyn, NY based Bessie award winning freelance dancer/performer, historical marine ecologist, and science communication instructor. She has worked with numerous choreographers and companies both nationally and internationally and is currently involved in projects with Carrie Ahern, Third Rail Projects, and Clarinda Mac Low/TRYST. As a freelance ecologist she focuses on the impacts humans have had on shoreline ecosystems and the creatures within them. She is also the research assistant and fact checker for author Paul Greenberg and teaches with the Alan Alda Center for Communicating Science. Increasingly invested in combining her artist and scientist halves, she seeks public processes to make data-rich science more understandable, embodied, and memorable for the general public.
//
NITIN MUKUL is a visual artist living and working in NYC. His work has been reviewed in The New York Times, The New York Press, The Wall Street Journal, Al Jazeera, Time Out, Asian Art News and Art India magazine. He has worked as an assistant for the late American minimalist artist Sol Lewitt and was a former Creative Director at the Indocenter of Art & Culture in NYC. He has shown with Nature Morte Gallery in Delhi, The Guild (Mumbai/New York), and Aicon Gallery (New York/London). His work was included in The India Art Fair in 2011, 2014, Art Asia Miami 2009, Hong Kong Art Fair 2009, Scope Art Basel 2009 and is held in private collections. He has curated exhibitions at P.S. 122 and Aicon Gallery in NYC and Arts•I Gallery in Delhi. nitinmukul.com/home.html
//
SUGAR LIFE // This New York based Franco/American/Japanese performance group is a gripping threat. Featuring the incredible Danny Tunick, Takuya Nakamura Stuart Popejoy and Christian Dautresme .These statesmen serve up a hilarious weirdo, off kilter Theater odyssey with live musical accompaniment as would be conducted and staged by David Lynch and John waters. www.sugarlife.net
//
GENJI AMINO is a poet and doctoral candidate in English and Comparative Literature at Columbia University. His archival research focuses on Asian American and African American poetry of the 1960s and 1970s. He co-directs an annual poetics program outside of Santa Fe, New Mexico, founded in 2010. He received his MFA from the Milton Avery Graduate School of the Arts at Bard College.