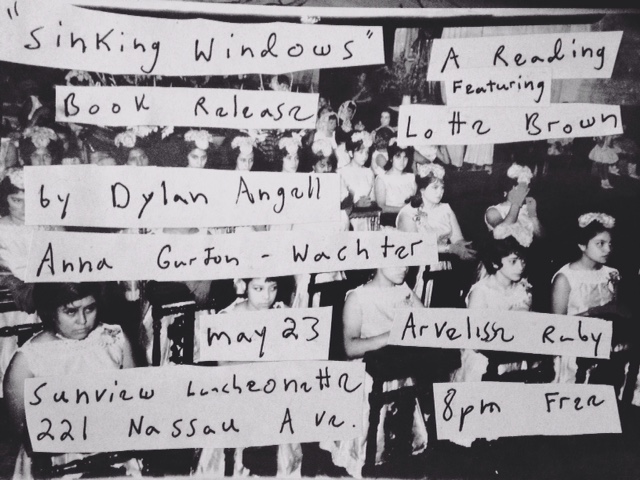 “Sinking Windows is a bilingual collection of observational poems and prose-pieces written by New York-based author Dylan Angell in April of 2019 while in attendance at the Mexico City-based residency, The Lab Program. The pieces within are made up of surrealist meditations of daily scenes that the author encountered during his time in Mexico City. The book was written, designed, translated, produced and presented all within the month of the residency.”

Dylan Angell is a North Carolinian who is currently based in Queens, New York. In 2016 he released the book, An Index of Strangers Whom I Will Never Forget A-Z, via his Basic Battles Books imprint. He has collaborated on two books with photographer Erin Taylor Kennedy; 2017’s I’ll Just Keep On Dreaming And Being The Way I Am and 2018’s Beyond the Colosseum. He has been published in Fanzine, Fluland, Parhelion, The Travelin’ Appalachians Revue, Sleaze Magazine and elsewhere.

Anna Gurton-Wachter is a writer, editor, and archivist. Her first full length book, Utopia Pipe Dream Memory, is forthcoming from Ugly Duckling Presse in December, 2019. Chapbooks include Spring Bomb, Mother of All, The Abundance Chamber Works Alone, Blank Blank Blues, and CYRUS. Other work has recently appeared in Ginger Zine, Social Text, and Vestiges. Anna edits and makes books with DoubleCross Press, a poetry micro-press publishing handmade letterpress chapbooks. She is a co-curator of the Segue Reading Series and together with Ian Dreiblatt she makes Counter Poetry, a low-tech high-fun online journal of writing and visual art. More info at annagw.com and @anna.as.metaphor

Lotte Brown is a writer and researcher from Belgium with a former life in art spaces in Antwerp, Brussels and Gent. Besides short stories, poems and articles she published more research reports then planned.

Lotte is currently making the third volume of ‘Becoming The Forest’, an open-ended publication with visual artist Una Hamilton Helle (UK/NO) supported by the Norwegian Cultural Fund, writing an essay in free verse about the return of the wolf in Belgium, finishing ‘Jacob in the Tower’ a fiction in 25 parts, working on a research project for the Knowledge Center of Flemish Cities about ‘otherness’, and in the meantime laboring over her first long form work.

After a solitary writing retreat in the Catskills in 2016 Lotte started commuting between NY City, Upstate New York and Belgium and slowly transitioning from writing in Dutch to writing English.

is a musician and self-published zinester from Puerto Rico. Fun For Now I & II and From The Van zines are collected works of poetry and photography, FFN are written in English and Spanish with themes that linger from relationships to politics. The material was worked while living in Puerto Rico, and later established in Brooklyn. From The Van is a photo diary after touring North America in 2014 and 2015 with one of my bands, AJ Davila y Terror Amor. The majority of the pictures depict landscapes from the Northeast, West and Midwest.