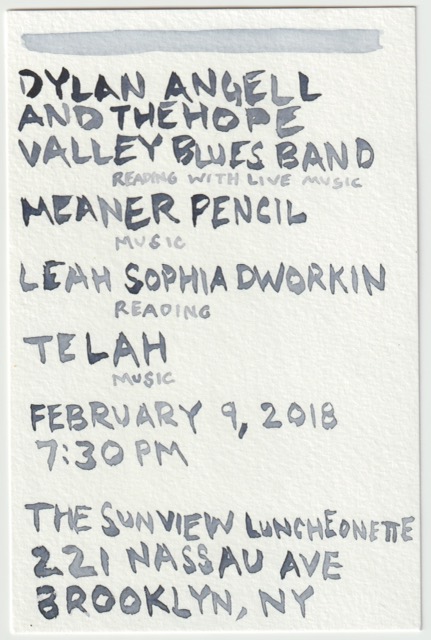 Join us for a night of saxophones and stories with:

Writer Dylan Angell will be performing a reading of his short story “Little Creatures” with the “Hope Valley Blues Band.” The band is made up of Saxophonist Joey Johnson (Little Gorgeous) Bass Player Frank Meadows and Drummer Jeff Widner (Telah)

Dylan Angell is a North Carolinian, a musician, a writer and is currently based in Queens, New York. In 2016 he released the book ‘An Index of Strangers Whom I Will Never Forget A-Z,’ via his Basic Battles Books imprint. In early 2017 he released ‘I’ll Just Keep On Dreaming And Being The Way I Am,’ a collaboration with the photographer Erin Taylor Kennedy. He has published his stories with Fluland and Fanzine.

Meaner Pencil is a singing cellist whose style is influenced by blues, post-punk, and romantic opera. She uses her songs to glorify everyday experiences and acts of kindness, but is also willing to face the darkness. She is often heard singing in the New York subway system late at night.

Leah Sophia Dworkin lives in New York, NY where she is currently working on Hey Whitefish, a collection of short stories. She’s an assistant editor at Conjunctions and holds an MFA in Fiction from Columbia University.