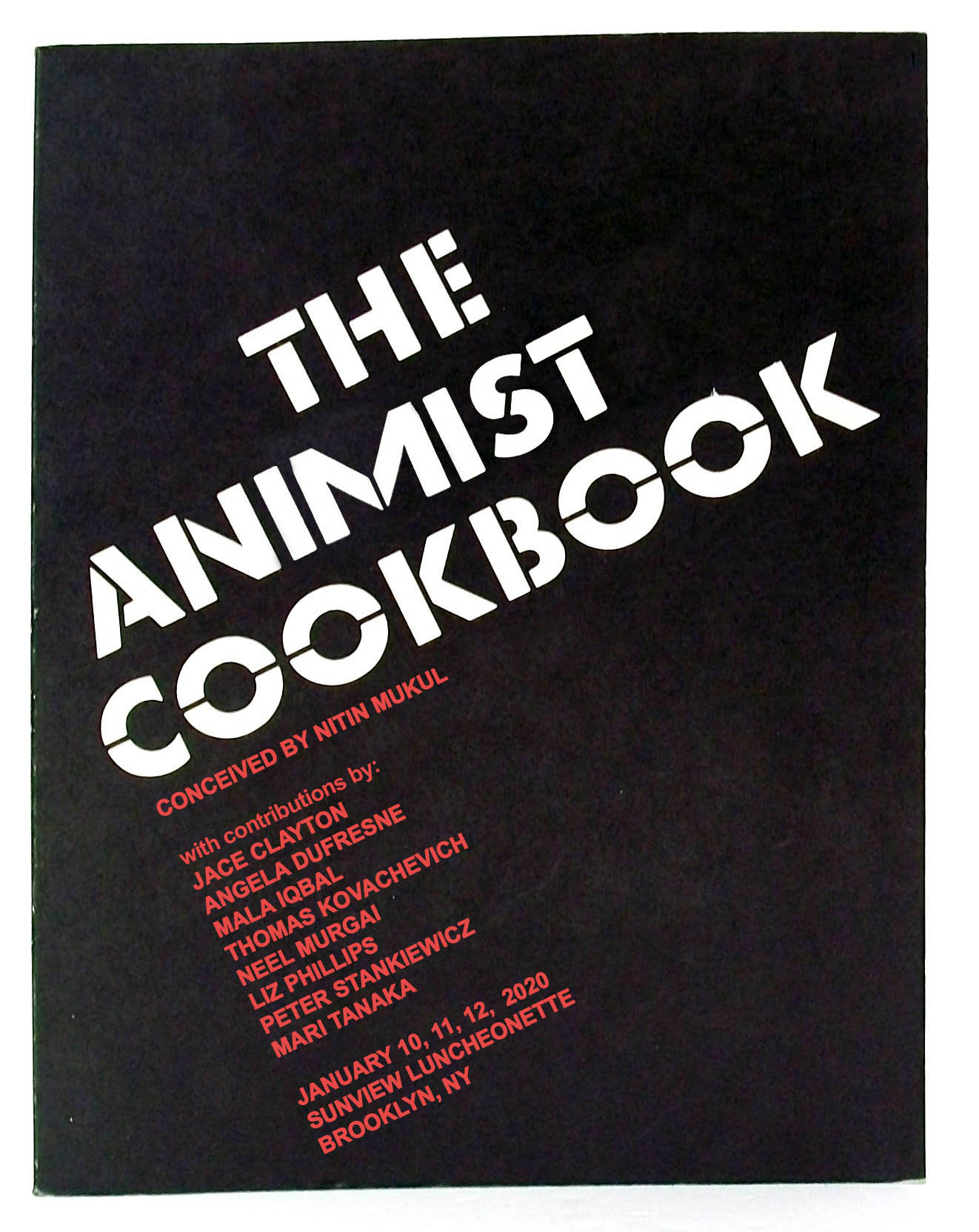 Conceived by Nitin Mukul, with contributions by:

High Tea will be served in the afternoons, and light meals and beverages in the evenings.

William Powell, author of The Anarchist Cookbook (1971) said it was initially designed as a book meant to provide education towards “the silent majority” of the American population. He described that the book was not intended for extant political fringe organizations, rather it was designed to galvanize a great societal change by inciting the general population. It contains ‘recipes’ for the manufacture of explosives, rudimentary telecommunications phreaking devices, and related weapons, as well as instructions for home manufacturing of illicit drugs, including LSD.

The Animist Cookbook (2019) is an exhibition and a manual for recognizing that the silent, inanimate things around us, seemingly non-sentient, are in flux and can act and react with their own agency. Our surroundings and the things we are surrounded by are not necessarily passive, they exert influence on how we behave. The space around us, and its ambient conditions, respond to our presence and actions in ways that can be made more apparent through our interventions. The work presented illuminates a path to decenter ourselves and empathize with our environment.

The Animist Cookbook will have its first incarnation at the Sunview Luncheonette. A day and evening of actions, gestures, interactions, interventions with the space (inside/out) and the things that reside there. The Luncheonette appears more as a site of everyday life rather than the antiseptic space typical of galleries and museums. The accumulated history embedded in its materiality will provide a point of departure.

Jace Clayton is an artist and writer based in Manhattan, also known for his work as DJ /rupture. Clayton uses an interdisciplinary approach to focus on how sound, memory, and public space interact, with an emphasis on low-income communities and the global South. His book Uproot: Travels in 21st Century Music and Digital Culture was published in 2016 by Farrar, Straus and Giroux. He serves on the Music faculty of Bard College’s Milton Avery Graduate School of the Arts and is currently teaching a seminar on ‘Interdisciplinary Temporalities in Performance’ at Harvard University.

A rigorous conceptual framework grounds Clayton as he move across areas as diverse as software design, composition of choral works, or turntablism. As so many of our ways of communicating with each other and experiencing the world translate to the digital and dematerialize, he reflects on what is lost, what new possibilities emerge, and contemporary art’s role in contouring these changes. These considerations inform his work, which often draws on populist modes of expression in combination with a critical approach to technology.

Angela Dufresne is a painter and video artist originally from Connecticut. She was raised in Olathe, Kansas, the town Dick and Perry stopped in before they killed the Clutters (In Cold Blood). She lives and works in Brooklyn, NY and sometimes can be found in the Catskills. She received the first college degree in her family lineage. Her work articulates non-paranoid, porous ways of being in a world fraught by fear, power and possession. Through painting, drawing and performative works, she wields heterotopic narratives that are non-hierarchical, joyous and polymorphous. She has exhibited at the Hammer Museum in Los Angeles; P.S.1 Contemporary Art Center in Queens, NY; the Portland Museumof Art in Portland, ME; The National Academy of Arts and Letters in New York;The Leslie-Lohman Museum in New York; the Kemper Museum in Kansas City, MO; Brooklyn Academy of Music in Brooklyn, NY; The Cleveland Institute of Artin Cleveland, OH; The Aldridge Museum in Ridgefield, CT;, NY; the Rose Museum in Waltham, MA, among others. Dufresne received a 2016 Guggenheim Fellowship.

Mala Iqbal
Mala Iqbal was born in the Bronx in 1973 and grew up in a household where three cultures and four languages intersected. Her most recent solo show was at Taylor University in Upland, Indiana (2018). Other solo shows were at Ulterior Gallery in New York, Twelve Gates Arts in Philadelphia, Bellwether Gallery and PPOW in New York and Richard Heller Gallery in Los Angeles. Her work has been exhibited in group shows throughout the United States as well as in Australia, China, Europe and India. Her work has been reviewed in various publications including The New York Times, The Village Voice and The New Yorker. Iqbal has been awarded artist residencies at Yaddo, The Fine Arts Work Center and the Hermitage Artist Retreat. She received a New York Foundation for the Arts (NYFA) fellowship in Painting in 2008. Mala Iqbal lives and works in New York City.

Liz Phillips
New York-based artist Liz Phillips has been making interactive multi-media installations for the past 30 years, which combine audio and visual art forms with new technologies to create a fascinating interactive experience. Born in New Jersey in 1951, Phillips received a B.A. from Bennington College in 1973. In 1981, she co-founded Parabola Arts Foundation, a not-for-profit organization created by five media artists from varied disciplines (music, sculpture, film, video) which provides funding for art-related projects. Phillips has made and exhibited interactive sound and multimedia installations at numerous art museums, alternative spaces, festivals, and public spaces. These include The Whitney Museum of American Art, the San Francisco Museum of Modern Art, the Spoleto Festival USA, the Walker Art Museum, Ars Electronica, Jacob’s Pillow, The Kitchen, and Creative Time, among others. Phillips has also collaborated with the Merce Cunningham Dance Company, and her work was presented by the Cleveland Orchestra, IBM Japan, and the World Financial Center.

Peter Stankiewicz
Peter Stankiewicz is a sculptor who usually makes small formalist works in his Greenpoint, Brooklyn studio. He earned a BFA from UMASS at Amherst. You can see his work on instagram as plasticsculpture. His drawings can be seen in the flat files of Pierogi Gallery. He grew up in the hills of Western Massachusetts and served in the Army in Kentucky. His work has been in shows at The Governor’s Island Art Fair, NYC, Pierogi Gallery, Brooklyn, Galapagos Art Space, Brooklyn, and ABC No Rio, NYC, among others. When not in the studio he paints interiors, sometimes attaches wheels to instrument cases, and makes careful observations of his East Village habitat.

Mari Tanaka
Born in Kyushu, Japan, Mari Tanaka was raised in Shinto and Japanese Zen philosophy. After a near-death experience, Mari explored ancient techniques for her own self-healing and began studies of energy work in earnest. She is a practitioner of meditation, fascinated by the nexus of mind, body and spirit. Mari explores the potential of sound - using Indian classical drone instruments, the tanpura and shrutibox, to create sonic spaces for meditation and journeying as well as a wide range of music including, raga, jazz, ambient and orchestral projects. From Lincoln Center to Carnegie Hall, she has shared the stage with notable musicians like Reggie Workman, Eric Whitacre, Amir El Saffar, Andy Statman, Jeff “Tain” Watts, Adam Rudolph, Charles Burnham, Marc Cary, Jay Gandhi, Steve Gorn, and Brooklyn Raga Massive.