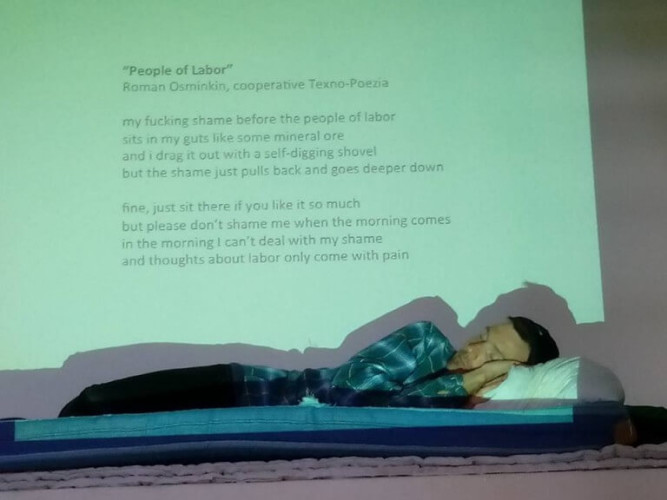 We’re excited to announce the upcoming release of Roman Osminkin’s first English language collection of poems and songs entitled “Not A Word About Politics!” published by NYC-based Cicada Press.

Roman Osminkin (b.1979) is a Saint Petersburg based poet, artist, and performer.  Osminkin belongs to a community of Russian leftist artists, writers, activists, and intellectuals. He shares his comrades’ belief that creative work must be linked to activism and the building of oppositional community. He was a member of the Laboratory of Poetic Actionism, which combined video-poems (distributing the poetic word in three dimensions) and more aggressive interventions into public space. He was active in the Saint Petersburg Street University movement that emerged in 2008. He is a regular contributor to Translit, the most influential leftist journal of poetry and poetics in Russia.

He frequently collaborates with Chto Delat group and other artistic collectives.  His musical project Texno-Poetry performs regularly at festivals and art openings, often alongside Kirill Medvedev Arkady Kots band. He is a member of Russian Socialist Movement and a Ph.D student at the Russian Institute of Art History, writing a dissertation on participatory art and its popular manifestations beyond the art world.
He has three books in Russian Comrade-Thing (Kraft, 2010), Comrade-Word (Kraft, 2012), and Texts with External Objectives (NLO, 2015).

Not a Word About Politics! (Cicada Press, NY, 2016) is Roman Osminkin’s first bi-lingual English-Russian publication, and a compendium of all existing English translation of his writing to-date.
The book will be of interest to those interested in contemporary Russian protest poetry and art.
http://www.cicadapress.net/titles/#NotAWord

Sample translations from Not a Word About Politics!:

REVOLUTION
Consider the aforementioned word
Really think about it
How did it appear on that screen/page/other surface (hereinafter, medium)?
Turn the medium 180 degrees
uoıʇnloʌǝɹ
Look at the word again
Stand on your head
(If in your current physical state this is impossible just turn the medium another 180 degrees)
Pronounce the word to yourself one syllable at a time
Repeat the word in a barely audible whisper
Pronounce the word aloud at the top of your voice
Glance to both sides
Smell the medium the word’s written on
Think what you could compare the smell to
Lick the medium the word’s written on
Think what you could compare the taste to
Pronounce the word again at your usual speaking volume
And again
And again
Take a look around you
If no one’s around pronounce the word at twice your usual speaking volume
Glance to both sides
If no one’s around shriek the word as loud as you possibly can
Draw it out
With a transition into a squeal on the last syllable,
oooooon becoming IIIIIIII
Let your body join the scream
Set your emotions free
At this stage you should be joined by others
At least one of your neighbors or coworkers
If no one’s around then open all the windows and scream out each of them in order
If that doesn’t work go outside
Draw it out as long as you possibly can
Shout the word out
Don’t be shy
Walk proud through the middle of traffic singing it
Someone will join you here
Coordinate your actions and sing in unison
Don’t stop
In time your song has to become a resounding chant
Just ignore the disgruntled motorists honking their horns and the cop who’s right behind you with a grip on your sleeve fixing to hit you with a billyclub
Give yourself completely over to what you’re doing – sing chant dance
Kick everything else out of your path
Now if you’re really following these instructions
At some point you’re going to have to set the controls for the Kremlin
Go there
Gather the last of your strength
Take a deep breath
And together shout the word as loud as you possibly can one last time
If the decibel level gets high enough, the Kremlin will have no choice but to beautifully reveal itself as a house of cards and collapse into a thousand red bricks
Gather them. They’re magical stones, and you need them for the next level
Congratulations! You have arrived at the end of the national level and will receive a bonus credit in the form of one extra life
While the next level’s loading, try to relax. Listen to the Internationale.
OK, the next level’s loaded
It’s a global level called
WORLD REVOLUTION
Consider the aforementioned word
Really think about it
—Translated by Ian Dreiblatt