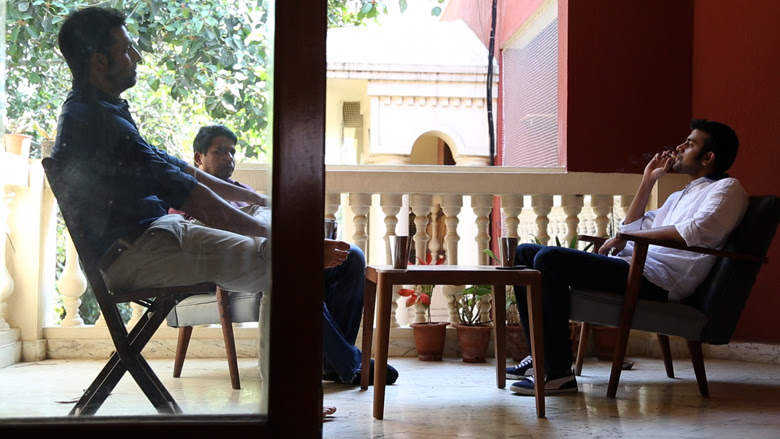 Works by Sunview member Sunita Prasad. A culmination of a residency at T.A.J. & SKE Projects in Bangalore, India this past spring. Recitations not from memory is an installation of video works on gendered experience in urban, middle-class India. Women's stories of discrimination are re-mapped onto men's performances in an introspective translation of experience. The Recitations will be installed on monitors in the diner booths throughout the space for leisurely individual viewing. Another piece on view is Agni Agonies, a projected clip reel of Indian women surviving fires in Bollywood (and some Hollywood) cinema. With some minor interventions.

This project was made possible through the generous support of the Art Matters Foundation, the Brooklyn Arts Council, the Madagascar Institute, Angela Conant, and Ingrid Staats.

Sunita Prasad is a New York City based artist. Her projects employ methods of visual translation such as drag, re-enactment, movement, and touch to shift or rupture expectations about how gendered bodies should behave, be represented, or be historicized. Her works have been shown in galleries, festivals, and performance venues internationally, including the Palais de Tokyo in Paris; the Brooklyn Museum, Flux Factory and Momenta Art in New York City; and Homesession in Barcelona. Sunita is originally from Syracuse NY and received a BFA in Film & TV from New York University and an MFA in Photography from the Rhode Island School of Design.
Sunita's collaborations include projects with Laryssa Husiak, Mare Liberum, the Ecocide Project, Red Channels, Some Feminists in Your Neighborhood, Frédéric Durieu, Jean Barberis, and Rabid Hands.
A full CV can be downloaded here.