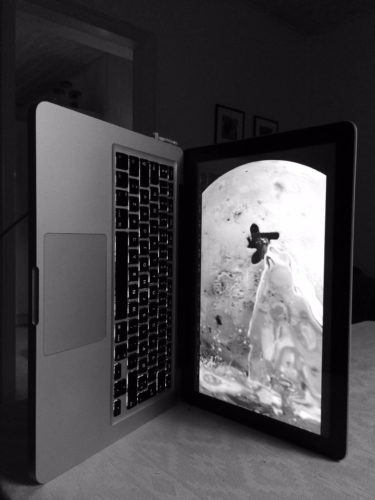 This is the second in a three part series of conversations setting Marie Kølbæk Iversen’s iterable film installation Io/I in dialog with three forms of matrilinearity. The installation and conversation on July 22 will center on the notion of projection, starting with a reading of Ida Marie Hede’s short text I’m looking at myself that will open up a conversation about the caveats of representation vis–à–vis maps, drawings, stories, science…

The animation piece “Io/I” consists of animated satellite images taken by NASA’s spacecrafts, Voyager I and II and Galileo, documenting Jupiter’s volcanic moon Io. Io was discovered by Italian astronomer Galileo Galilei in 1610 and named after Hera’s priestess Io, who was transformed into a white heifer after having an affair with Jupiter, and she was chased by a gadfly that would bite her every time she would stop to rest. In other words, mythological Io was doomed to circle restlessly around Jupiter just like the moon circles its planet. At the same time the piece thematizes the limits of recognition and the Self by mistranslating facts about the moon from the Galileo’s native Italian into English: ‘io’ is also the Italian word for ‘I’, so when Italian Galileo looked out into space – the ultimate unknown – and fixed his gaze upon Jupiter’s moon, he didn’t just see a fitting analogy for a mythological figure; he also saw himself. Thereby “Io/I” indirectly actualizes the projection mechanisms at play when we try to grasp that which is ultimately foreign to us.

The third conversation, on July 30, will focus on what is gained and/or lost as we consider the co-constitution of our world from an animist prospective.