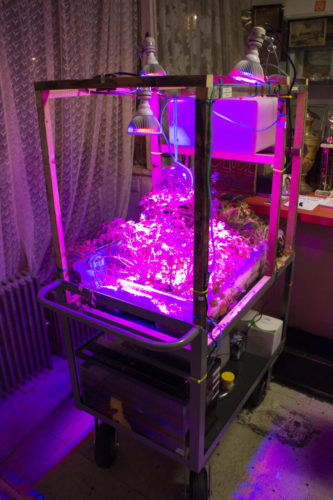 The unveiling of the Sunview's own small-scale aquaponics fish/plant garden. Hot drinks will be served. Enjoy digital drawings, visuals, and sound from the garden.
Matej Vakula & Dylan Gauthier will present a sculptural prototype of a compact, mobile, vertical, aquaponic garden to grow herbs and vegetables (and/with fish) in the Sunview Luncheonette. The blueprint for this sculpture will be made available as a risograph printed broadside.
In the warmer months, the sculpture will reside in the Sunview's backyard, and will function as a mobile information point for the local distribution of printed media containing drawings based on digital data collected in the garden and a toolkit for neighbors to build their own fully contained indoor gardens as an alternative to planting in their crude-oil-soaked backyards.
◊
When we first started working with Bea in the Sunview, the front window was filled with a tangle of plants, mostly overgrown spider plants and ivies, that over the course of the first winter had frozen, thawed, and froze again. Eventually they were hauled outside by an impatient film crew and never brought back (their pots still reside in the garden, sans plants). It always felt like a loss, though we get more light now, and Bea has brought in fake flowers and a couple of plastic potted plants which aren't so bad. When Dylan started talking with Matej about a project to create an aquaponic growing structure as a sculpture in the Sunview's window (and back yard), it was these first plants they had in mind. They had also wanted to build a garden in the Sunview's back yard, but with the oil spill and all (you know just the largest oil spill in US history) and the toxic plumes, they had no desire to actually plant anything in the ground, fearin' what it might bring up. They decided instead to build an indoor/outdoor mobile aquaponic sonic phonic hydroponic garden. Aquaponics is a viable system of growing plants alongside fish in a symbiotic circle of life/waste in which the fish poop is used to fertilize the plants and the plants give the fish a reason to live, which then cheers the Sunview up over the cold winter while providing fresh herbs and small vegetables to member events...The fish are worker fish and are not intended to be harvest or eaten, in a nod to the space's largely vegan membership.
◊
The project is sponsored by the Slovak Ministry of Culture, program Pro Slovakia, with plants donated by SproutHome. 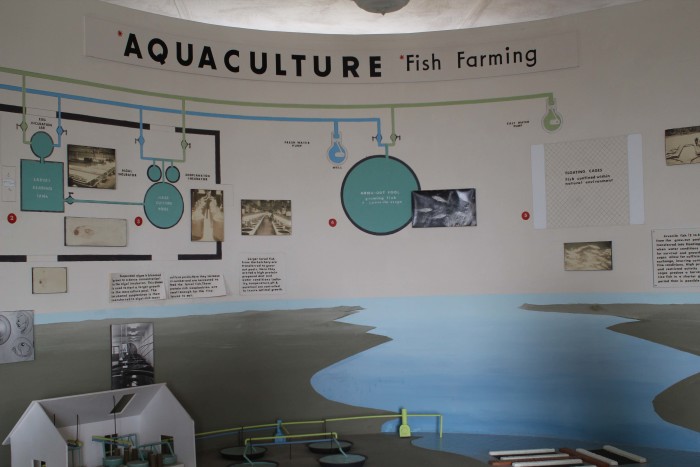 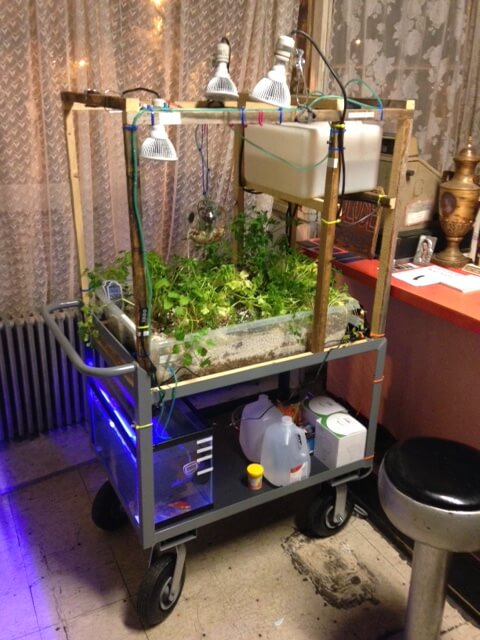